I pressed ‘Play’ on my Ipod and this is what I heard…Clampdown, By The Clash. 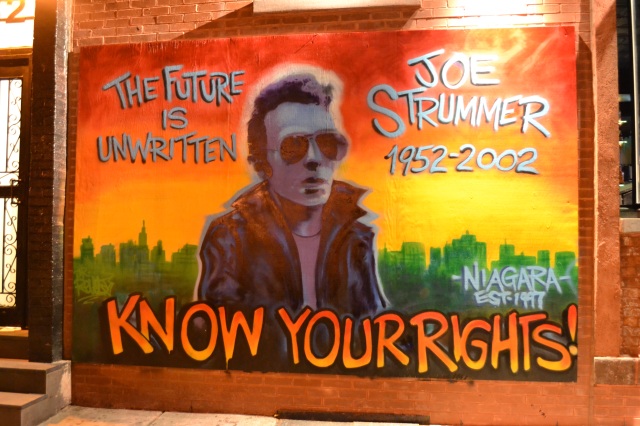 The song that popped up today on the shuffle has provided probably the easiest song and photo pairing I have ever done. Much has been written about the importance and history of The Clash over the years. A band that came along at the right time in rock and roll history with little regard for playing it safe, and a middle finger raised upwards to anyone who got in their way. The aggression and attitude in the music and songs was balanced by great music. Punk rock sometimes gets erroneously labelled as three chords played fast and aggressively. Hearing The Clash you realize how incorrect an assumption that is with music that is tinged with reggae, ska, funk, and with a nod to the early roots of rock and roll. Maybe even more importantly, their song lyrics spoke to a generation of disenfranchised kids in a way that mainstream rock and roll was not doing.

That can be said about much of the punk ethos in fact.  Much like with hip-hop, punk inspired art and fashion (not to mention hairstyles) soon developed. Like most anything that becomes popular the original intent can sometimes become diluted, and the music and fashion become very different than the origins. One area that I like to think keeps some of that punk ethos that I am seeing more of lately is street art. It isn’t something I paid much attention until this year I have to admit.

Moving earlier this year from Manhattan to Queens one thing I noticed early on was that it was everywhere. On fences, walls and metal shutters you can scarcely walk a block and not see some form of it. In fact not far from where we live is an entire area dedicated to it called the Welling Court Mural Project. Building and property owners agree to let artists use their space as the artist’s canvas. The art varies from esoteric and dreamlike, to that more subversive and punk aesthetic. The overall Street Art movement seems to be growing. Now that I am more in tune with it, I seem to spot it everywhere now, and not just in my neighborhood. So it was that in May I noticed this great memorial to the late great Joe Strummer of The Clash in Greenwich Village. Which is why my choice of photos here was so easy!

*Photo Shuffle is a new, very short slice of my regular blogs based on setting my Ipod on shuffle and matching up one of my photographs to whatever comes up.