Last week I returned from a short trip to Ireland. The main reason for being there was for my great aunt Brid’s 100th Birthday Celebration. It was wonderful to be with my (large) extended family for such a special event, and it was also wonderful to be back in Ireland again. It had been eight years since my last trip, which was for our honeymoon. Even though I was there for only a few days after flying in, I made sure to make the most of it. That is something you just seem to do when you visit Ireland. Especially in Donegal where my family is all originally from. It is a place of wondrous beauty- all rugged coastlines and rolling hills, flowing streams and deep glens. Its hard to see it all, especially on such a short trip, but I made an effort to try. Of course I took my camera with me nearly everywhere I went. Below in the gallery are some highlights of the trip.

At this point I have written a few posts based around Ireland or the other Celtic countries (here and here). Like my other posts they were based around the idea of finding a musical pairing or match for the photographs I took so I do not want to repeat what I have already written about. On this trip, in between various family events, as I wandered around, I became aware more than ever before about the sounds of Ireland, or Irish ‘noise’ if you will.  When I thought about  new ways I could write about the country I thought that this idea was interesting. It starts innocently enough when stepping outside in the morning-the chirp of a bird, the incessant baa of sheep which are…everywhere, or the deep rumbling echo of a cow in the distance.

You are never far from water of some sort in Ireland, so a short walk out to one of my favorite local spots-a unique rock formation at the end of a peninsula known as Muckross Head provides the sound of crashing waves and the continuous ebb and flow of the Atlantic Ocean pummeling the ancient rocks as they have for centuries now, pockmarking the rocks into unique patterns. High above the distinctive sea cliffs at Slieve League the sound of wind dominates, even on a calm day, punctuated only by the occasional seagull. The height of the cliffs and the whistling winds often block out the noise of the ocean directly below, as if in subsiding they might reveal some sort of secret.

Away from the cliffs, water also dominates. The gentle burble of a flowing stream or the steady roar of a waterfall are never distant. From small town piers, to large fishing ports like Killybegs, the sounds of ships of all types can be heard. A creak of ropes tied to the wood of small craft, or the more incessant horns and machinery of a large fishing trawler just arriving in port are all a part of the ‘noise’ of Ireland as well. Further inland, in the deep glens that slice through the landscape a different sort of noise is heard. It might be the swish of the tall grass in the summer breeze, or the steady hum of a tractor coming up the road. Once again the sound of sheep dominate, while inside the homes that dot the hills, the distinctive crackle (and smell) of a peat fire can be heard.

In town a different sort of noise takes over, be it a casual meeting between friends at the grocery to the up and down roars of a crowd watching sports in the pub. There is a cadence to the conversations that is uniquely Irish compared to other cultures to my ears. Depending where you are, it might even come with a dash of the Irish language included, especially in Donegal.  It was while at the pub one night that I really took notice of this. Beyond the well known lilt of the Irish accent, I realized that the true nature of Irish ‘noise’ was based on the sound of people having fun. From the front rooms of people’s homes or family events like Aunt Brid’s celebration to those pubs, the Irish have nearly cornered the market on having a good time. That is where my musical choice for this post comes in, for few bands in Ireland, let alone anywhere have as much fun as The Saw Doctors do.

From their formation in Tuam, Galway in the mid-1980’s, to their breakthrough singles N17 and I Useta Lover, followed by their debut album, the sublimely titled If This Is Rock & Roll I Want My Old Job Back, the Saw Doctors have remained one of the best bands out there. Right from their beginnings they seemed to have tapped into a part of Irish culture not served by traditional Irish music, or by the full rock style of bands like U2.  The roots of its music are based more on day to day life, a narrative of small town Irish culture. Songs about working the land, or a football match. Songs about pretty girls or an old car. Or in the case of this song, about a Céilí band making the rounds at any type of party out there for the pure fun of it. The Saw Doctors music is sometimes humorous, sometimes introspective, but always hopeful in the end. Songs that seem to come from being out in that beautiful landscape or a darkened pub and listening to the ‘noise’ around you. An Irish noise. Long may it stay that way. 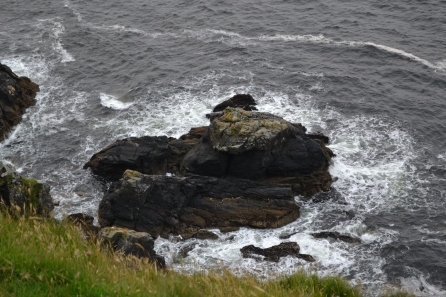 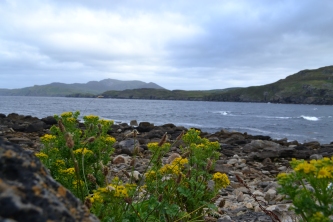 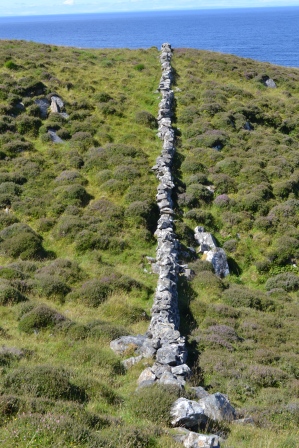 Stone Walls To The Sea-Donegal

All Roads Lead To Kilcar

Muckross Head from a distance

The Road To The Ocean 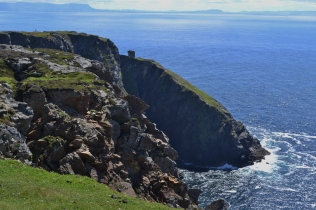 Martello Tower On The Cliffs 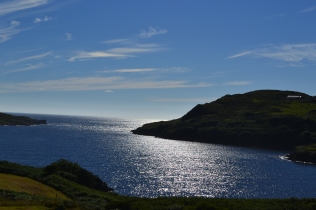