Five years.  Today is five years to the day since I nervously assembled what I hoped was a cogent idea for a blog combining my love for photography and music together in one place. I remember posting it late at night here on WordPress skeptical that anyone would bother to read it. Skeptical that it was any good. Skeptical that the idea would make sense. I shared it on Facebook, sent it out via email to some people and posted it on a music forum based in the UK and promptly went to sleep. A few short hours later I woke up and nervously checked my phone first thing to see what if any reaction there was.

That I am still here now writing this post is the proof  that the reaction was positive. In fact, recollecting that time I was overjoyed. Not just from the comments people were leaving for me, but because of the way it satisfied me personally. I have written about this before but it bears repeating-once I committed and defined this idea of giving a still photograph its own soundtrack I knew that I had created something unique that satisfied me deep down. It touched all the right buttons for me-combining the disparate thoughts and themes of my life into something that made sense. Where urban meets nature, where art meets architecture, where transportation meets history. All with a song to go along with the photo that seemed fitting no matter the genre.

‘You can feel it all over’

And it still  satisfies me to this day. The writing has changed, the understanding of how to promote posts has changed, there have been false starts, one-offs, mistakes, highs, lows and there have been surprises. I have been touched by the response to my words, and I have touched others with my words. I have made deep lasting friendships with people literally around the world.  Most of all there has been a  feeling that no matter how many views or comments I receive, I am on a path that remains meaningful to me five years on with over 200 posts published and being read in 122 countries to date.

It is inevitable during occasions like this to look back. To dig through the archives and see the evolution. I have been doing that for the past few weeks, reading posts I haven’t read in a long time, grimacing at the mistakes I spot easily now and surprising myself at  passages that came out of nowhere. I saw moments where I lost the point and ones where the focus was sharp, focused and completely on point. On the photography side I realized that the earliest posts were typically a ragtag assortment of recent and old photos made to fit the theme whereas with recent posts I quite often took photos with an idea and a song lurking in my head before I had written a single word. As a result In the five years since I started, I think this has made me a better photographer as well.

‘Music is a world within itself

With a language we all understand’

It is a useful thing to look back. Regrets can make you shake your head in amusement at what once was important in your world-the jacket you wore in 1977, that song you swore in 1983,would never get old, a book that became your ‘philosophy’ in 1991. Years later you might be embarrassed to own up to any of them, but you know they were a part of you regardless. Looking back at my old posts I have that same feeling about some of them.  However rife they may be with wordiness or so-so photographs they are still a part of me. I am especially fond of my four previous anniversary posts. For the first I took a walk across the Manhattan Bridge accompanied by the sounds of Red Baraat. For the second I imagined myself in the director’s chair assembling the opening scenes of a movie to the accompaniment of guitarist Dan Ar Braz. For the third I wrote a letter to the young ‘me’ from the old ‘me’ with a fitting song by Jack Lukeman and a series of self-portraits. Last year I wrote a fictionalized account of a concert setup using songs from Bob Seger.

I had two stipulations for the song I wanted for this post. First it had to be an artist I have not written about before, and secondly, I wanted it to be a fun, upbeat and celebratory song. But then I had a third thought- to find a song that was about music itself. About how music makes us feel, about the emotions of music.  The beat, the groove, the hook, the lick, the riff, the pulse, the rhythm, the melody, the harmony. Music is the universal language and all of these elements are contained in practically every song. Thinking about those stipulations I realized the song I wanted was lurking on one of the most perfect albums of all time-Songs In The Key Of Life by Stevie Wonder. And that song (in case you haven’t already been grooving in your seat) is the infectious ‘Sir Duke.’ 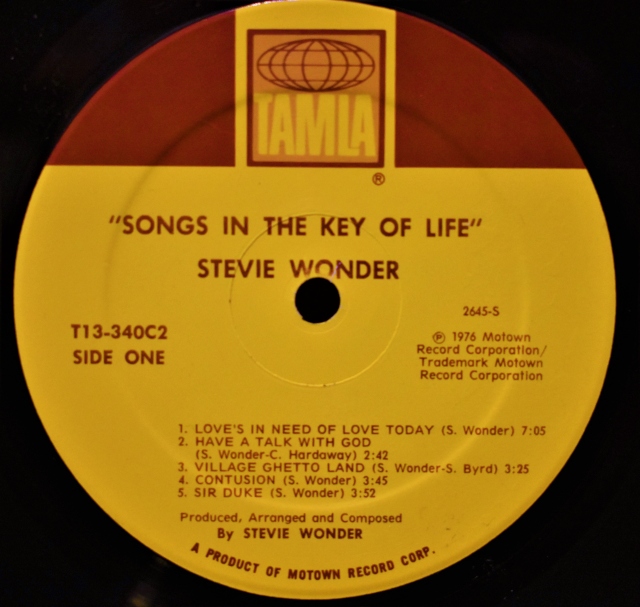 ‘Music knows it is and always will be

one of those things that life just won’t quit.’

Songs In The Key Of Life is one of those special albums that just takes you in right from the start with ‘Loves In Need Of Love Today’ all the way to the end with ‘Another Star’. The reason it still sounds fresh today is because the songs and arrangements were performed with real care and thought. Recently I have been reading about the great music studios such as Stax, Muscle Shoals and Motown. They all had in common a group of musicians who knew how to make great music not just for the hits, though the track record for all three studios speaks for itself in that regard.  Yet they also made music you feel deep down with arrangements more complex than they let on.  Songs In The Key Of Life is nothing but intricate arrangements in fact.  Song after amazing song goes by and does not let up for a second.

But on an album of such stellar material, Sir Duke is my favorite, and one of my  favorite songs by Stevie Wonder period. Beyond that killer horn intro and singalong chorus is a song about what actually makes music so compelling. Think about that for a second…when you are in the business of making music, you write about the things and people in your life. Social injustice, religion, love. Songs In The Key Of Life has songs about all of those things. Then along comes Sir Duke. Partly an homage to some of Stevie’s own musical hero’s-Ella Fitzgerald, Louis Armstrong, Glenn Miller, Count Basie, and the ‘king’ Duke Ellington,  Then it informs you what the key to a great song really is-

‘But just because a record has a groove

Don’t make it in the groove

But you can tell right away at letter A

When the people start to move.’

I wanted to use a song that was about music for a reason.  In  five years of writing I have attempted to  make a case for how special music truly is for me. How much I think about it daily in good times and bad. How much I feel the music be it from the Scottish Highlands or the Sahara, Donegal or Detroit. In five years of writing and pairing my own photographs what songs like Sir Duke reinforce for me is that –

Music takes you in

Music lies deep in your soul

Music is for sharing

Music is of course ultimately personal in how we respond and feel about it. Everyone is right and no one is wrong-the woman on the subway bopping along to the music on her headphones, the oboe player in the orchestra, the bass player thumping out a funky beat, the singer in a metal band all feel music differently. But on the really special albums like Songs In The Key Of Life these forces unite into something special and satisfying. You really feel it all-challenged, happy, sad, questioning life. You feel the love. You want to dance and sing along to every song.

The reason I wanted to use a song about music itself in this post was to make a point.  All I have ever wanted to do here is make my own contribution to the music I love so much. When combined with my photographs it made me feel like I was doing precisely that. I realized that music has broad enough shoulders to hear my contributions to it without me actually singing a note or playing an instrument. Stevie sings in Sir Duke that music is something you just don’t quit. And despite occasional frustrations, Soundtrack Of A Photograph is not something I will be quitting. I can share my feelings about music because I really do feel it all over. And that will never go away.

The video of Sir Duke posted below is something I made as a celebration.  It runs through the main photo I have used in every music post from the past five years to the present in the order published.  Short of reading all those posts it shows you where I have been the past five years. Seeing that past I now have a glimpse of where I want to go in the future. I plan to take this blog to some new and challenging new places in the very near future with even more evocative photographs than ever before, so please stick around!

Thank you to EVERYONE who has read, liked, or commented on any one of my posts in the past 5 years. I am truly humbled by your support.

Extra special thanks must go to all of the following-

I have been blessed that many of the musicians I have written about have liked and shared my posts on their social media. Several of them have gone further and became friends. In no particular order, I would like to thank some artists that have gone above and beyond- Ralph McTell, Jimmy Castor, Chris Trapper, everyone at Daptone Records, Saundra Williams, Christa Nia, The Coral, Red Baraat, Dan Ar Braz, Carrie Newcomer, Fairport Convention, Orphan Colours, Ahab, Julissa Lopez,  Jules & The Jinks, Oysterband, Runrig, Jake Shears, The Mint Juleps, Thea Gilmore, Jackie Venson, Horslips, Danny Thompson, Alan Doyle, Toli Nameless, Rosanne Cash, Jack Lukeman, Altan, The Travelling Band, Angelique Kidjo, Ray Cooper, Joanne Shenandoah, Sarah Cahill, Leyla McCalla, and Ginny Mac.

To my parents Bob & Mary, my sisters Noreen and Eileen and their husbands Mike & Jose and my niece Kenna. To all of my dear cousins in Ireland and England-Brian, Niamh, Kellyann, Nora, Sarah, Laila, Mona & Hannah and all 3,743 spouses, kids and everyone else too numerous to mention! 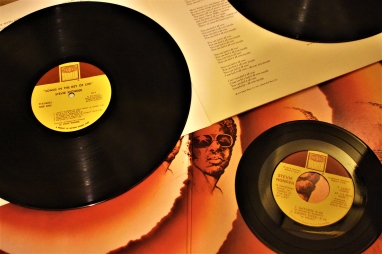