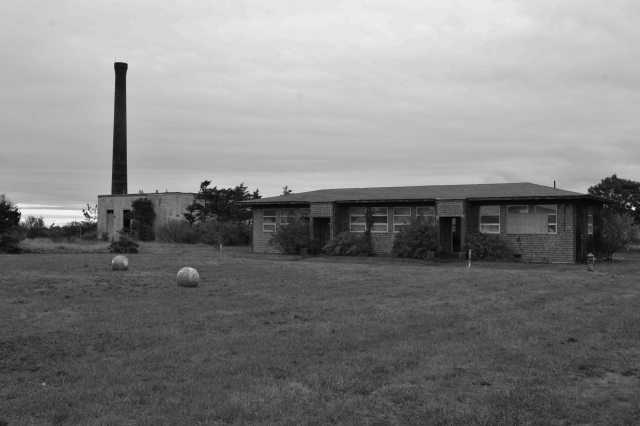 Well if last week’s inclusion of a song was a bit different for Monochrome Mondays, then this week’s installment is different as well. I’m going to start off by saying that the photo featured this week is not a great photo, nor do I intend it to be though of as such. There is nothing special about it. No great technique used to take it with camera settings. Nope, there is none of that. It is just a rather bleak  building standing by itself looking rather lonely. Honestly, until yesterday I had completely forgotten taking it. But enjoying a lazy day yesterday, my wife and I had a bit of a marathon of The Avengers. No, not the Marvel Comics Avengers, but the classic British TV show from the 1960’s. A few years back I introduced my wife to the show.

After some initial skepticism, she became as much of a fan of the show as I was, and especially the ‘Emma Peel’ years. We enjoy watching the dapper bowler hat wearing, umbrella carrying character of John Steed (played by Patrick MacNee) and his partner in saving the world from diabolical plots, Mrs. Emma Peel (as portrayed by Diana Rigg). The show is just a lot of fun, full of silly plots and fabulous fashions, especially by Emma Peel! There was one b&w season, and one color season with the Emma Peel character. It was while watching one of my favorite b&w episodes of the show yesterday-The Hour That Never Was that I thought of this photo because my photo and this particular episode have something in common actually. The plot of that particular episode has our heroes roaming the grounds of an abandoned Air Force base. Well actually, they weren’t expecting it to be fully abandoned yet, but that mystery comprises the central point of the first 3/4 of the episode.  A great deal of time is spent by Steed and Peel roaming empty buildings, hangars and runways. Military trucks and equipment lie abandoned everywhere and there is not another soul to be seen anywhere.

Last year in Cape Cod, we also found ourselves wandering the similarly eerie grounds of the former North Truro Air Force Station. Though it is now part of the National Park Service and some of the property and buildings re-imagined, it still has a bit of that eerie feel to it while walking around, much like Steed and Peel did in the episode. Maybe it was a subconscious thing on my part and reminded me of the episode, or maybe it just seemed ‘cinematic’ in some way, but the few photos I snapped were all done in monochrome. It just seemed so fitting!